Induction: The Hottest New (Old) Technology in the Kitchen

Are you thinking of upgrading your oven range or replacing an end-of-life one? Have you considered the benefits of induction stoves and cooktops? Most of us are probably a bit in the dark about this seemingly new way of cooking, although in actual fact induction cooking has been around far longer than we can have imagined.

In fact, induction technology is not a new concept by any means. It was first introduced at the World's Fair in Chicago in 1933, and following this, numerous induction cooker demonstrations were held by General Motors (GM) in North America by the Frigidaire division of GM during the 1950s. Such demonstrations highlighted the convenience and safety of induction cooking. One example of this was a newspaper being placed in between an induction cooker's surface and the pot while boiling a pot of water.

Following this, induction cooking never quite caught on in North America and induction ranges and cooktops weren't actually produced until a few decades later in the 1970s. Induction technology prior to this was used instead mostly in industrial applications used primarily for annealing metal, and was never made for public use.

A lot has happened since the 1970s. Currently, many of the world's top chefs are becoming induction cooking enthusiasts, which may seem surprising - especially since professional cooks known for their mastery of the gas flame are adopting glass-ceramic induction cooktops.

Interestingly, induction cooking now has about 8% of the market share for cooktops and ranges, and it's easy to see why, as there are many advantages. But before we look into the benefits of induction ranges and cooktops, let's take a look at what induction actually means and how it works in cooking.

Induction is a type of technology used in ranges and cooktops. Induction cooking uses electricity to produce an alternating magnetic field.

The magnetic field produced by the induction element creates an electric current in the cooking vessel. The concept is similar to the way that a wireless charger uses a magnetic field to charge your cell phone.

By rapidly switching the direction of the field the induced current within the pot rapidly changes direction. Eddy currents form in the vessel which create heat due to the electrical resistance of the metal.

The electromagnetic elements of an induction cooker are normally housed under a glass ceramic cooktop. Induction cookers only work with magnetic materials such as steel and cast iron. Non-ferromagnetic materials, including glass, ceramic, copper, and aluminum do not work with induction-based cooktops. You can get a conversion disc to use non-ferrous cookware on an induction stove though.

Put simply, where induction heating is concerned, the cooktop doesn't heat up - the cookware does. And as soon as the pot is removed the heating stops; the induction stove-top will not heat up unless there is a pot on top of it that contains ferrous metal. 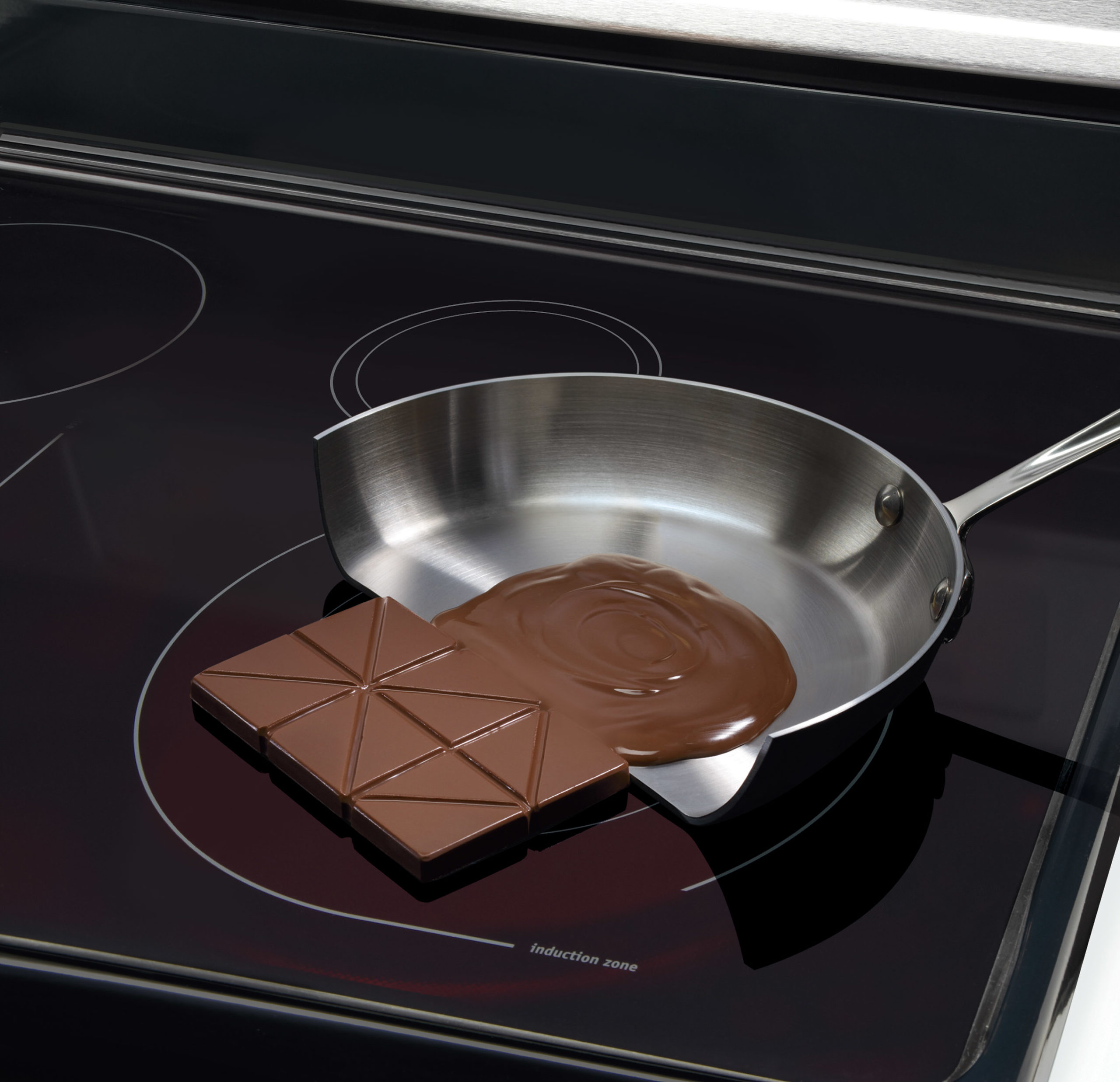 If that doesn't already have you curious about this cool technology, check out the many advantages to induction cooking below.

Temperature Control With induction, you're afforded super precise temperature control which allows for more controlled cooking. When you turn the burner off, heat transfer stops immediately, so there's less of a chance of foods boiling over or overcooking.

Easy to Clean Much like traditional electric cooktops, induction cooktops have a smooth, glass cooktop. However, since induction burners don't heat the surface of the cooktop, any spills, splatters, or occasional boil-overs won't burn onto the cooktop. Almost immediately after you finish cooking, the cooktop will be cool enough to easily clean whatever mess is left behind.

Cooks Quicker than Gas or Electric With induction, heat is transferred directly to your cookware, not the surface of the cooktop. This means food heats up and water boils much faster on induction cooktops when compared to electric or gas cooktops.

Energy Efficient The lack of excess heat is one of induction cooking's lesser-known eco-friendly attributes. Traditional gas and electric ranges heat up the air around the pan, losing up to half their heat to the surrounding environment. Not a good thing for large kitchen spaces like restaurants and warm climates - which are often made hotter with cooking.

This means having to crank up the air conditioning (if you're lucky to have it) when you're cooking - but not so with induction, where all the heat is transferred to the pot and very little ambient heat is generated. So induction cooking essentially reduces the heat in the kitchen. And with the current heatwave in Lower Mainland cities like Burnaby and Coquitlam, B.C. right now, what's not to like about that?

Better for the Environment While there are no Energy Star certifications for induction ranges, research by the U.S. Department of Energy indicates an induction cooker is 84% efficient at energy transfer, versus 74% for a smooth-top electric unit - giving it a heating performance comparable to a gas element. More significantly, induction is 90% efficient with its power use, using 2.8 kW to deliver 2.52 kW. This is a substantial improvement over electric coils, which use 2.0 kW to deliver 1.1 kW (a 55% efficiency), and over gas, which uses 3.5 kW to generate 1.75 kW (a 50% efficiency).

And with the Committee for Climate Change recommending that no new homes in the US are connected to the gas grid by 2025 at the latest (to eliminate the impact of fossil fuels), perhaps this will free the path for induction cooking to increase in popularity? 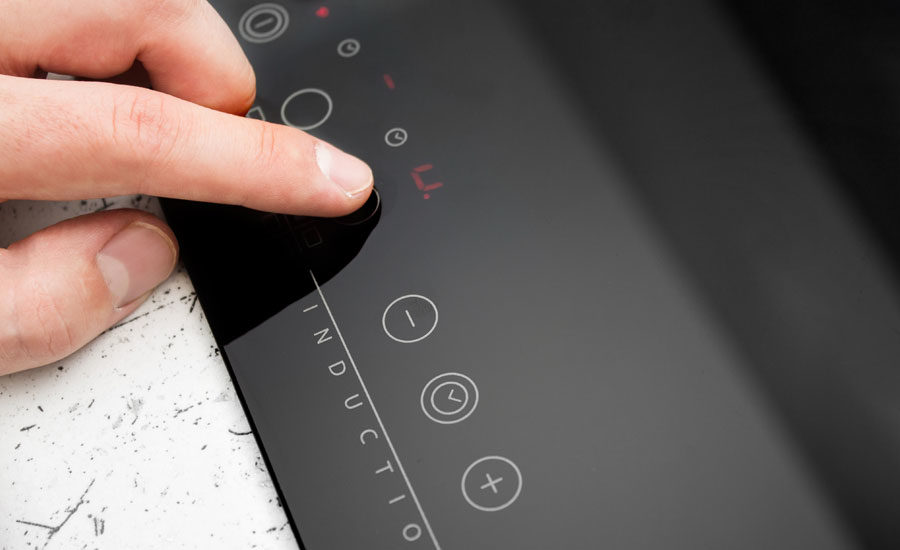 Durable Induction cooktops are made of an eco-friendly glass ceramic material. A poor heat conductor, the cooktop ensures only a little heat is lost through the bottom of the pot and leaves the cooking surface cool to the touch. You can actually place your hand on the cooking area after lifting up the hot pot. What's not to like about that? This means no dried, burnt food or melted pots with the potential to destroy the range's surface, and no need to scratch the surface cleaning all the gunk off (as there won't be any).

Offers a Safer Way to Cook Safety should always be a concern when you are considering a new appliance to bring into your home. Cooktops and ranges are designed to create heat, and induction is no different. Since induction heats your cookware directly, as opposed to the cooktop surface, the surface won't get hot until the right cookware is placed in the cooking zone. It also cools down much more quickly than traditional gas or electric cooktops.

Safety is an especially important factor for families with children in their home. Induction elements shut down automatically when a pot or pan is removed from the cooktop, thereby reducing the risk of accidentally leaving a burner on.

To conclude, Induction is no more difficult to use than an electric or gas cooktop. Once you're familiar with the controls and cooking times, you probably won't need to adapt as much as you may think.

And if the numerous advantages are anything to go on, Induction cooking could look set to become the hottest new (old) technology in the kitchen. What do you think?